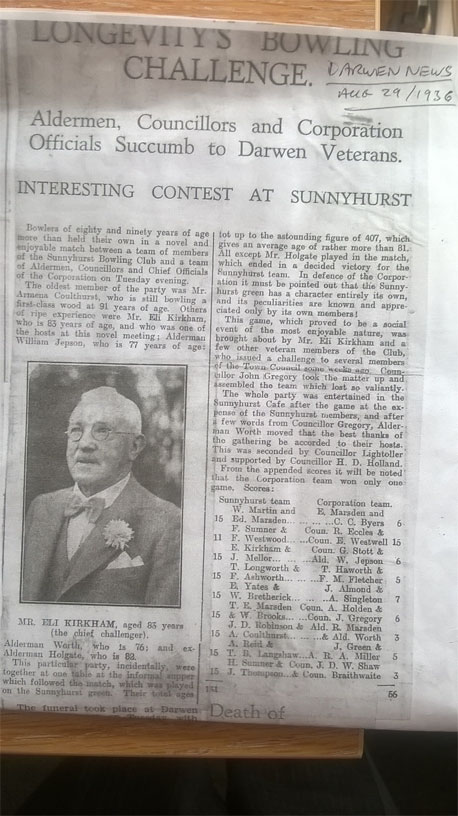 Little is known of the early years of the club other than it was founded in 1909 presumably as a local Darwen Borough amenity.

One picture does exist from these early days and shows views across to the Chadwick Gateway and views to the moors. Benches can be seen on what was the back garden of the Sunnyhurst café/tearooms located at the end cottage. This picture gives credence to the rumours that you could get an ice-cream and sit at the back garden of the tea-rooms and watch people bowling on the green.

The only reference I have obtained of any matches played during these early years is a newspaper cutting from the old Darwen News dated 29th August 1936. This was a challenge match between the Club and a team of Aldermen, Councillors and Officials of the Corporation .I have included the article below.

There does exsist a President’s Cup with the first winner being a Mr.F. Sumner and dated 1928. Records of the winners are noted until 1939 (the beginning of the war) and then resumed in 1975. In 1992 this cup was replaced by the Jack Walker Cup and records are to date.

Four other competitions were initiated in 1991 these being Gents and Ladies singles, a club knock-out cup and a spring doubles cup with records of winners to date .

I have no information on when a pavilion was first added to the club but it was updated and re-furbished in 1995 and re-opened by Janet Anderson M.P.

If you know of anyone with any further recollections, information ,old photographs or memorabilia we would love to hear from you.