The singles event took place on Sunday the 2nd September and we were lucky that the weather held out for us with a lovely late summers day.

A total of 11 members turned out which whilst disappointing given the number of registered members didn’t prevent this hardy bunch from having a great afternoons bowling.(later turning into even more of a social event thanks to David and Lesley Jennings contributions of liquid refreshments)

Whilst the green was not at its best with a bit of a bobbly surface and some bare patches following the scorchio weather we have experienced it didnt stop the precision bowling of our members with a small number of seasoned observers spectating.

At around 5.20pm after some tense moments in the finals  the winners were announced as John Hacking (mens singles) and Sue Hacking(ladies singles).

Well done to both and to all who attended.

Pictures taken on the day can be found in PHOTOS MENU. 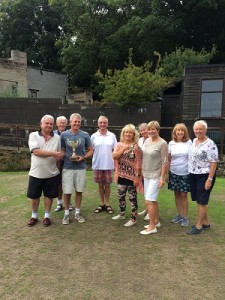 John and Sue Hacking receive their trophies on singles day 2018